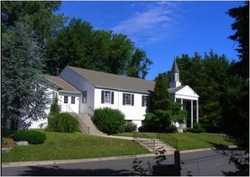 Community Gospel held its first service in 1959. We began in Redman's Hall on Paris Avenue with the Rev. Joseph Campana as the founding Pastor. In just one year Pastor Campana had led a team of local craftsman in the construction of the first church building located at 430 Birchwood Road in Northvale, New Jersey.

In 1964 the Rev. Don Veator became the pastor and served the congregation until 1966. Under his ministry the church had the parsonage built at 433 Birchwood Road.

In 1966 the Rev. Frank Mangano came to Community Gospel and served as the pastor for the next seventeen years. He established a strong ministry to families in Northvale with the annual Vacation Bible School Ministry. He retired in 1983.

In 1983 the Rev. David Greco became the church's fourth pastor. Under his ministry the church grew and completed a major building program adding a new sanctuary. In 1990 he transitioned to the Assemblies of God District headquarters where he became the District Youth Director for all the Assemblies of God churches throughout the State of New Jersey.

In 1990 Rev. Ron Pettibone moved to Northvale after completing twelve years of ministry at Midvale Gospel Assembly of God in Wanaque, New Jersey.  Pastor Ron lead the congregation for over 17 years helping bring financial stability and faithful service to the church and community.  He and his wife, Ambra raised two sons here in Northvale.  In early 2007, Pastor Ron was called upon to help stabilize and strengthen an Assemblies of God church in Lambertville, NJ.

Pastor Joel VanBriggle and his wife Gail accepted an invitation to serve as the church's 6th pastor in July of 2007.  They moved to Northvale in September of 2007.  They have two children, Anthony (6) and Emily (3).  While Joel and Gail are young, they bring a wide range of talents and experience to CGC.  They bring a youthful enthusiasm and a passionate heart to serve the community with a vision to share God's love with the people of the Northern Valley/Rockland County region! In 2013 Pastor Joel and his family were called to serve as Missionaries in Europe with Convoy of Hope.

Pastor Richard Martinez became our new Senior Pastor in January of 2014. He is an Ordained minister with the Assemblies of God and is the founder and Director of the NJ District School of Ministry. He holds an M.A. in Theology from Seton Hall University, an M.A. in Biblical Studies from the Alliance Theological Seminary of Nyack College, as well as a Doctor of Ministry degree from the Assemblies of God Theological Seminary, Springfield, MO. He is passionate about making disciples, reaching the lost, and leading people into a fresh encounter with Jesus Christ. He and his lovely wife, Marie and two precious little daughter's, Zoe & Xena currently reside in Northvale, NJ.